Christmas lights switch on in Stafford

November 21, 2010
I was reminded by Dave in the office that last year that we some how turned the innocent festive event of the christmas lights switch on into an all day drinking session (I suspect because Pete needed a drink to recover from dealing with festive shoppers turning Starbucks into a creche due to the Santa parade)

This year just as odd, Stafford born PC David Rathband who lost his eyesight in the Raoul Moat shoot out in July, someone dressed as Shaun the Sheep, the Mayor and the Town Crier (and music leading up to this provided from the band from this years Panto playing 70's soul tracks - not very festive) 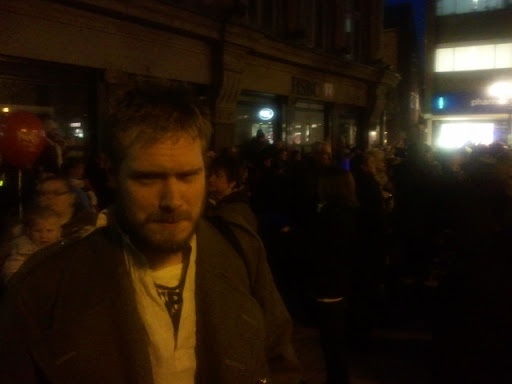 (Pete looking a bit cold and slightly unimpressed at the rendition of a Blues Brothers track)
Anyway, the lights switched on (or the bloke on the top of the guild hall connected the extension lead at the correct time) this years fireworks were very pretty - and a much more appropriate soundtrack of 90's pop and Katy Perry's Firework - probably the most played pop tune in November.
Then we proceeded to carry on drinking fine ales in Joxers - much more festive.
2 Years in a row makes it a tradition right?? See you all in the Back to the Future square next year ;)