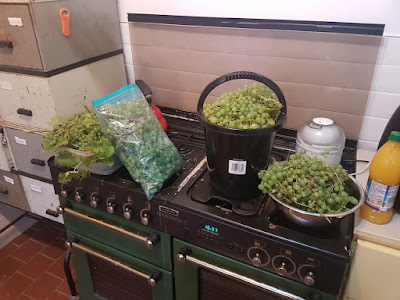 We had  a bumper grape harvest from the two vines in the back garden this year - since last years attempt at wine is still bubbling away somewhere (it's probably vinegar by now, also useful) I thought I'd turn it into jam. I underestimated this as an undertaking

I joked once about making jam during the time it took my students to makes games in a 48hr games jam - I haven't done that yet but I am trying to turn this haul of grapes from the into jam - I have not planned this well.

I picked the grapes on Sunday - It took me significantly longer to prep and turn these grapes into juice to work from - but I got 5.7lt (10 pints) of grape juice in the end - luckily I had some large jugs left over from student cocktail making days to house it in.

A shout out to Pete at this point who had to swing by Tesco on Tuesday night and buy all the jam sugar they had to hand after appropriately running a jam night - All hail 24hrs supermarkets. It took me until then to pick them all and boil them for the juice

Last night I also got distracted by sorting out lessons for the rest of the semester and the skins I was boiling for extra pectin caught at the bottom of my stock pot - mmm, blackened grape skins. Just for once I did some forward planning and I had a bottle of liquid pectin in so this ins't the end of the world - but I'm dubious about how well my jams will set anyway so any extra pectin would have helped, I guess - Can you tell I'm new to this level of jam making.

Having been scouring the stock pot at gone midnight after the grape skin incident I tried to work out if my life would be made better by buying an actual jam pan, my friend convinced me it probably wouldn't (she's sensible like that) - but it turns out she borrows her mums one to make jam with.

Anyway - Tonight I have used 1.8lt of the juice, and a bag and a half of sugar and I have made enough jam to fill all of my available mason jars - it would have been 6 but one cracked in the sterilisation process - but now I know I can make 5 jars of jam easily enough. They look pretty and the jars have sealed so that's something at least. I'm hoping it will set as it cools - the internet assured me this should happen. 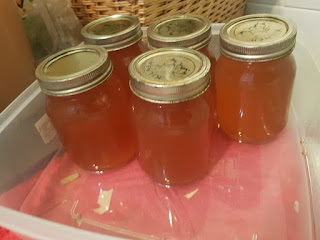 I really had underestimated how much maths was involved in jam making - I feel my GCSE C in Maths isn't up to scratch at this point. So now I have 4lt of juice left, 2 bags of sugar and 2/3 of a bottle of pectin left but no more jam jars left to fill (Like I said I didn't plan ahead on this) - but I think that's enough raw ingredients

If I can get more jars on my way home tomorrow (which I can, Stafford is blessed with a well stocked with a Wilkos I can we hopefully turn the rest of into jam and everyone can have green grape jam, that may or may not set, and may or may not be tasty for Christmas! Just remind me of all of this next time I'm flippant about preserving anything!